This cinnamon apple monkey bread is both fun to make AND eat! It's drizzled with caramel sauce, for an extra indulgent treat.

If you've never made monkey bread before, I highly recommend starting with this recipe right here. This is one of my favorite Fall bakes, because it's much easier than you would think, plus the house smells insanely good when this is in the oven.

When I was writing this recipe, I started with one of my favorite classic Fall flavors: cinnamon apple. My apple cinnamon scone recipe is actually a hit year-round, so I know you all love that flavor combo as much as I do!

Speaking of which, I know there are a few ways to make monkey bread. I've tried a few of those methods, but always come back to my trusty bundt pan. I just love the end look of it!

What Is Monkey Bread (And Why Is It Called That)?

So before we dive into the recipe, let's take a quick second to chat about monkey bread. Monkey bread is a sweet, doughy treat that usually involves cinnamon sugar. It consists of soft little pieces of dough stacked on top of one another and baked.

I actually had no idea why it's called monkey bread until I started reading up for this post. Apparently, it's because you pick it apart to eat it, similar to how monkeys eat. Isn't that fun? I love that.

To make my gluten free monkey bread, we're going to start by making a simple cinnamon sugar topping. Set that aside until we're ready to use it, and get started on the dough next.

To make the dough, whisk the dry ingredients together. Add in the cubed butter and just give it a toss to combine. Finally, stir in the milk. From here, we're going to move the mixture over to a stand mixer and use the hook attachment to knead the dough for around 3 minutes.

Once that's ready, transfer the dough to a lightly floured surface. Take just a couple of minutes to knead by hand. The dough should come together nicely at this point. Use your hands to break off small pieces of dough -- it doesn't have to be perfect, but the pieces should be around 2 inches big. Shape them into little rounds that resemble gnocchi. That's the best way I can describe it! The dough should hold together when pressed with your fingers.

Next, we're going to roll each piece of dough in the cinnamon sugar topping. Be gentle, as the dough might start to crumble and fall apart if you work it too much. Toss the pieces of dough into a medium bowl along with the apples and caramel sauce. Again, be gentle, but give it one good stir to combine.

From here, we're just going to transfer the whole mixture into a greased bundt pan. Bake on 350ºF for around 45 minutes. Allow the monkey bread to cool in the pan for about 10 minutes before inverting onto a plate and serving.

Did you try my cinnamon apple monkey bread? Leave me a comment below or tag me on Instagram @justastastyblog and #justastastyblog!

For More Gluten Free Apple Dessert Recipes, Check Out My... 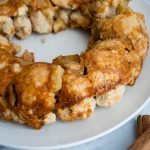