These gluten free apple cinnamon scones make for the perfect Fall breakfast! They're so soft in the center but still perfectly crisp on the outside.

If you're a fan of these scones, you have to try my apple sour cream cake!

If you'll remember, I declared my love of eggless scones early on in this blogging journey with my honey scones recipe. I was (and still am) SO thrilled with that recipe, it was only a matter of time before another variation made its way on here. Enter: my gluten free apple cinnamon scones.

These kind of taste like a warm apple pie, wrapped up in scone form. They're actually extra soft and moist on the inside, so forget any pre-conceived notions you might have about extra dry and crumbly scones. Still, you will get those crunchy tops with this recipe... so basically, these eggless scones are perfect 😉

And speaking of warm apple pie, I highly recommend enjoying these right away. They will keep for a few days in an airtight container for sure, but they are just SO good fresh out of the oven.

To make my gluten free apple cinnamon scones, you'll start by whisking the flour, baking powder, cinnamon, and salt together in a large bowl. Throw in the cubed butter and use a pastry blender or two butter knives to combine. You will end up with a crumbly mixture and will likely still have little, pea-sized pieces of butter throughout.

In a separate, smaller bowl, mix the sugar with the applesauce, vanilla, and half & half. Fold this wet mixture into the dry ingredients. Once the dough starts to come together, stir in the apple chunks.

Pour your dough out onto a parchment-lined baking sheet and use your hands to shape it into a round, slightly flattened disc. This next part's optional, but I always think it's a nice finishing touch: brush the disc with a bit of half & half and sprinkle some sugar and cinnamon on top. Yum!

Cut into 8 even wedges and pop into the oven. Bake on 400ºF for about 20 minutes, then allow the scones to cool on the pan before serving!

PS - you may also want to check out my maple glazed banana scones and gluten free pumpkin scones!

Did you try my gluten free apple cinnamon scones? Leave me a comment below or tag me on Instagram @justastastyblog and #justastastyblog! 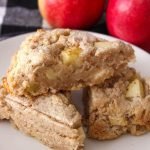