This easy gluten free pumpkin cheesecake is so rich and creamy, with the perfect amount of spice in both the filling AND the graham cracker crust.

Okay, get ready because I think I may have just come up with the perfect Thanksgiving dessert. I mentioned in my chocolate chip pumpkin bread post that I've never been a fan of store-bought pumpkin pie (although homemade pumpkin pie with condensed milk is another story). If you're looking to switch it up from pie, though, here's my easy pumpkin cheesecake.

Between the cream cheese, the sour cream, and the pumpkin puree, this super easy pumpkin cheesecake is SO creamy. I love it because the pumpkin flavor definitely comes through, but it's balanced out nicely with the tangy cream cheese and sour cream.

We're adding just a bit of pumpkin pie spice (see recipe notes about making your own blend if you don't want to buy some), of course, but not so much so that it takes over. If that makes sense?

We're actually baking this pumpkin cheesecake, and while baked cheesecakes typically require eggs for structure, we can get away with going eggless here thanks to all of that pumpkin (which technically can be used as an egg substitute, depending on the recipe).

And of course, we have that sweet gluten free graham cracker crust. I like to add a pinch of nutmeg here... again, nothing too overpowering. Just enough.

To make the gluten free graham cracker crust, first you will want to blend up your graham crackers into crumbs using a food processor. Pour into a small bowl and mix in the melted butter, nutmeg, and salt. Press the crust into the bottom of your springform pan, and use the bottom of a measuring cup to pack it in and form a nice even layer. Pop the crust into the refrigerator while you work on the filling.

To make the filling, start by beating the softened cream cheese with the sour cream until it's smooth and creamy. Mix in the rest of your ingredients and continue to beat until combined.

Pour the filling onto your prepared crust, and bake on 350ºF for about 45 minutes. Once it's out of the oven, cool the pumpkin cheesecake completely, then cover and chill in the refrigerator for at least 1 hour or until you're ready to serve. Trust me, you won't want to miss this step, as chilling the cheesecake is important in allowing it to set up properly.

Even though we baked it, the lack of eggs in this recipe means you still won't fully get the same effect as a traditional cheesecake, and that's why the chilling afterwards helps. You'll be left with a thick and perfect filling that doesn't fall apart on you when you slice. Yay!

Top with whipped cream, or nothing at all! If you do end up with leftovers (which is doubtful), store in an airtight container in the fridge.

Did you try my gluten free pumpkin cheesecake? Leave me a comment below or tag me on Instagram @justastastyblog and #justastastyblog!

For More Gluten Free Pumpkin Recipes, Check Out My: 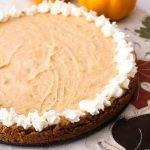