These classic gluten free blondies are sure to be a hit... I'd be shocked to find someone who doesn't love these! They're sweet, gooey, buttery, and oh-so-delicious. Plus they're made without eggs!

If you are a fan of these gluten free blondies, you will love my white chocolate raspberry blondies and my frosted sugar cookie bars.

My mother-in-law passed the recipe on to me, but it originated from her mother, who had saved it off of a bag of Heath Toffee Bits (ironically, I no longer add the toffee bits to these gluten free blondies due to the almonds in them).

Being able to make something for him that held such warm memories from his childhood was so special for me, and I was thrilled the first time I attempted the gluten free blondies and he gave them a big thumbs up -- just like he remembered them.

So trust me when I tell you, you will want to make a big batch of these for everyone you know. They're that good.

I know blondies (also referred to as blonde brownies) might be an unfamiliar concept to a lot of people out there, so let me break it down for you! Blondies are rich in flavor and soft in texture, and they contain a lot of the same base ingredients as regular brownies, but they are made without chocolate.

STEP ONE: To make these gluten free blondies, you'll start by combining the dry ingredients in a small bowl.

STEP TWO: Using your mixer, cream the butter with both the granulated sugar and brown sugar.

STEP THREE: Add in the vanilla and prepared egg replacer and mix,

STEP FOUR: Simply add your dry ingredients and beat until it's all combined.

STEP FIVE: Transfer the batter into a square baking pan (either greased well or lined with parchment paper) and bake on 350ºF for 25 minutes. The original recipe used a 9x13 pan, but I prefer slightly thicker blonde brownies, so I use an 8" square pan instead.

Can I make these gluten free blondies dairy free?

You should be able to substitute your favorite non-dairy butter for dairy free blondies, but I haven't tested this myself.

How will I know when the blondies are done?

A toothpick inserted into the center should come out with a few moist crumbs. I don't know about you, but I actually like my blondies to be gooey and a bit undercooked inside. You don't want to over-bake these!

Can I freeze these blondies?

Yes, you can freeze individually sliced blondies by wrapping tightly in plastic wrap.

Did you make these gluten free blondies? Leave me a comment below or tag me @justastastyblog and #justastastyblog! And don't forget to subscribe to get new recipes directly in your inbox. 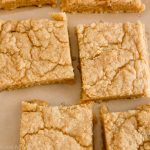