These gluten free snickerdoodle bars are a super easy and fun treat for any cinnamon lovers in your life!

So these bars were a total no-brainer. You still get that delicious cinnamon sugar flavor without the cream of tartar, and no need to chill and roll your dough. These little guys are super soft and are extra good served warm, straight out of the oven.

When I was initially writing up this recipe, I was going to go with my usual egg replacer to see how that would turn out. But then I thought about the Greek yogurt I had sitting in my fridge, and decided to just use that as my binding agent. I will say, you do get a slight tangy flavor from the yogurt in your finished snickerdoodle bars -- but we actually like them that way!

Between that delicious sweet and tangy flavor and the cinnamon sugar topping, these snickerdoodle cookie bars will be a huge hit for anyone you make them for. I can pretty much guarantee it!

I'm really not exaggerating when I say these gluten free snickerdoodle bars are incredibly easy to make. You'll start by mixing up your oil, yogurt, and vanilla with the sugar. I just used a rubber spatula -- no electric mixers needed for this one!

Next, add in the flour, baking powder, cinnamon, and salt and stir it all up until it's nice and combined. Bake on 350ºF for 15-18 minutes, and let the bars cool completely before you cut them up.

And don't forget about that cinnamon sugar topping! Just mix 1 tablespoon of sugar with 1 teaspoon cinnamon, and sprinkle on top of your batter before popping it into the oven.

To store these gluten free cookie bars, simply pop them into an airtight container and store at room temperature for up to 5 days. We prefer them the day they're made, but they should keep just fine for the first few days afterwards.

Did you try my gluten free snickerdoodle bars? Leave me a comment below or tag me on Instagram @justastastyblog and #justastastyblog. And don't forget to subscribe to get new recipes delivered straight to your inbox!

Just As Tasty: Gluten-Free & Eggless Baking Through the Seasons

Be sure to check out my cookbook for tons of festive and easy-to-make gluten-free treats! From Valentine's Day and Easter to the holiday season and every celebration in between, this book has got you covered.

For More Gluten Free Bar Recipes, Check Out My... 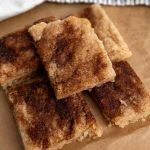