This apple cider bundt cake tastes like fall! Not only is it full of warm apple spice flavor, it's also topped with an irresistible cinnamon sugar crust.

If you're a fan of this cake, you HAVE to try my apple pie cookies, baked apple cider donuts and my apple blondies!

Apple cider donuts are one of my favorite things about fall. Just the idea of them makes me smile!

And while I love making homemade baked donuts, I thought it would be fun to take it one step farther this season and make a whole apple cider bundt cake.

This cake is on the dense side, but it's SO soft in texture. The cinnamon sugar coating almost acts like a crust. It really just tastes like one giant apple cider donut!

STEP ONE: Start by combining the dry ingredients (flour, baking powder, cinnamon, and salt) in a bowl. Whisk it all up and set aside for now.

STEP TWO: Use your mixer to cream the butter with both sugars until it's completely smooth.

STEP FOUR: Add the dry ingredients and continue to mix on low until your cake batter comes together.

STEP FIVE: Transfer the batter to your greased bundt pan. Use a spatula to ensure it's evenly spread. Bake for 50-55 minutes, or until a toothpick inserted into the center comes out clean. Cool for at least 30 minutes before inverting.

STEP SIX: Once the cake has completely cooled, brush the melted butter all over the top and sides of the cake. Sprinkle the cinnamon sugar on top and use your hands to press some onto the sides.

What is the difference between apple cider and apple juice?

Apple cider is unfiltered and not processed, which means it will have some of that residue at the bottom and no added sugar or ingredients.

Can I make this apple cider cake dairy free?

You should be able to make this cake dairy free by using non-dairy butter and yogurt. I would opt for a thicker yogurt, similar in texture to Greek yogurt.

How do you flip a bundt cake?

Once the cake has cooled, place an upside-down plate on top, covering the cake. Hold the pan and plate together with both hands. In one swift motion, quickly flip both over so that the pan is now on top of the plate. If the cake doesn't immediately release when you lift the pan, leave the pan on top of the plate for a few minutes. The cake should drop onto the plate on its own.

Did you try my apple cider bundt cake? Leave me a comment below or tag me on Instagram @justastastyblog and #justastastyblog! And don't forget to subscribe to get new recipes directly in your inbox. 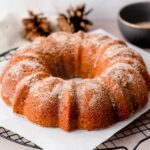