These gluten free apple cider donuts just taste like fall! The cinnamon sugar topping is not to be missed. It's the perfect warm and cozy treat for the colder months.

If you are a fan of these donuts, you have to try my apple cider bundt cake, apple sour cream cake and air fryer apple fritters!

Okay, I think this might be one of my favorite recipes that I've shared with you here so far. I know that's a bold statement, because everything here is delicious... I make sure of it before I share with all of you!

BUT you know now that I love this time of year. And one of my favorite things to have in the fall is apple cider. It always makes me think of one of my favorite Fall activities: an evening with Poe. A local theater company performs various Poe pieces. It all happens after dark, of course, so the performances are lit by candlelight and best enjoyed with hot apple cider.

There's just something so cozy about these baked apple cider donuts, and I can't wait for you to try them and tell me how you liked them!

STEP ONE: Start by whisking the flour, baking powder, baking soda, salt, and cinnamon in a small bowl.

STEP TWO: Then, in a larger bowl, mix the rest of the ingredients (sugar, melted butter, yogurt, apple cider, and applesauce) together.

STEP THREE: Next, just add the dry ingredients into the wet mixture and stir with a rubber spatula until it all comes together and you have a nice, light batter.

STEP FOUR: Transfer the batter into a couple of greased donut pans. Bake on 350ºF for 12 minutes, or until the donuts feel springy when you lightly push your finger down on them. Let the apple cider donuts cool in the pans completely before adding your topping.

STEP FIVE: When the donuts are ready, melt some butter in a small bowl and, in a separate small bowl, mix together the cinnamon and sugar. Dip each donut in the butter first, then in the cinnamon sugar mixture.

Can I make these donuts dairy free?

Yes, you should be able to substitute your favorite non-dairy butter and yogurt. Just make sure the yogurt is similar in texture to Greek yogurt.

Can I make these donuts without a donut pan?

I have not tried it, but you may be able to use a muffin tin and some foil to create a makeshift donut pan. I do recommend buying a set of donut pans if you bake regularly, though. I've got tons of baked donut recipes!

How should I store baked donuts?

You can store the baked donuts in an airtight container at room temperature for up to 3 days. These donuts are best enjoyed the day they are made.

Did you try my gluten free apple cider donuts? Leave me a comment below or tag me on Instagram @justastastyblog and #justastastyblog! And don't forget to subscribe to get new recipes directly in your inbox.

Watch How To Make These Donuts

A post shared by Taleen | Just As Tasty (@justastastyblog) 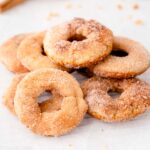