These homemade gluten free pop tarts are so much better than anything store-bought! They're flaky, with a sweet jam filling and topped with raspberry icing.

When it comes to adjusting to the gluten free lifestyle, there are undoubtedly certain beloved and nostalgic treats that may feel out of reach. The good news is, though, I'm all about recreating those favorites but making them both gluten free and eggless!

Which is why I decided it was time to try my hand at homemade pop tarts from scratch. And I must say, these are actually SO much better than the store-bought kind. Because they're not cloyingly sweet, and they just taste... well, homemade, for one.

It may seem like making your own gluten free pop tarts would be a lot of work, but I promise I'm breaking it down and making it as simple as possible.

If you're a regular reader, you know by now that I strive to make gluten free and allergy friendly baking as approachable as I can. There's no need to overcomplicate things! So I'm going to talk you through all of the steps.

You may have landed here because you were wondering if pop tarts are safe to eat. While it IS possible to find store-bought gluten free pop tarts, traditional pop tarts are definitely not gluten free and not safe for anyone with a wheat allergy or gluten intolerance. These are made with regular wheat flour.

Which is why I set out to develop this recipe! Again, I know there are gluten free options out there, but it's just more fun to do it this way in my opinion 🙂

What Do You Put In Pop Tarts?

I wanted to develop a raspberry pop tart recipe specifically, so that's what we're doing here! We're filling these guys with raspberry jam.

That's it! Really. Plain and simple. Just your favorite store-bought jam. It goes without saying, you can opt for any type of jam you'd like here -- it doesn't have to be raspberry!

To make my gluten free pop tarts, we'll start with the dough. Pour the pie mix into a large bowl and add cold, cubed butter. Use a pastry blender or two knives to cut the butter into the mix.

You'll end up with a mixture that looks like coarse sand. Some chunks of butter throughout is OK. Stir in ice cold water, one tablespoon at a time, until dough starts to come together when pressed. You don't want the dough to be dry, but you also don't want it to be too wet.

Divide the dough in half. Use your hands to flatten each half into a round disc. Wrap tightly in plastic wrap and refrigerate for at least 1 hour.

Arrange half the rectangle onto a lined baking sheet. Spread 1-2 teaspoons of jam on top, then place a second rectangle on top of that. Use a fork to crimp the edges. Bake on 350ºF for 27-30 minutes.

While the pop tarts are baking, make the pop tart icing. All you have to do is combine the powdered sugar and freeze dried raspberries in a small bowl. Add two tablespoons of whole milk and stir. Then drizzle or spread on top of your cooled pop tarts!

Like pie dough, you want to work with cold ingredients here -- cold butter and cold water. For this reason, you really should also work with one disc at a time. That means, while you roll out your first disc of chilled dough, you should leave the second disc in the refrigerator.

If the dough gets too warm or starts to fall apart on you while rolling and cutting, just pop it back into the fridge for another 15 minutes.

If the dough is too dry and crumbly even after chilling, sprinkle some ice cold water on top and work it in with your hands before rolling.

I like to use a food processor to grind up the freeze dried raspberries, but you can also throw them in a zip-top bag and use a rolling pin to crush them.

If you don't want to use freeze dried berries, feel free to omit them! Your icing will still be delicious, just not raspberry-flavored. You can use a tiny bit of gel food coloring to add that pink color.

Did you try my gluten free pop tarts? Leave me a comment below or tag me on Instagram @justastastyblog and #justastastyblog! And don't forget to subscribe to get new recipes right in your inbox.

Just As Tasty: Gluten-Free & Eggless Baking Through the Seasons

Be sure to check out my cookbook for tons of festive and easy-to-make gluten-free treats! From Valentine's Day and Easter to the holiday season and every celebration in between, this book has got you covered.

For More Gluten Free Breakfast Recipes, Check Out My... 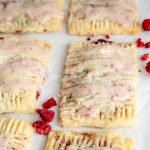