These baked cinnamon donuts are such a cozy and comforting treat, especially when enjoyed straight out of the oven!

Regular readers know, my donut pans get a ton of use. I was skeptical when I first ordered them, but it's safe to say I'm totally hooked. Gluten free baked donuts are my jam!

Cinnamon sugar is such a classic donut flavor, in my opinion, so it was only a matter of time before I attempted to whip up a gluten free version. And boy am I glad that I did.

These baked donuts are soft and cakey. They're easy to make. And they're topped with cinnamon sugar. The donuts themselves are not overly sweet, because I knew I wanted the topping to really shine through.

So what are you waiting for? Grab your donut pans and head to the kitchen, because I can guarantee you will want to enjoy these cinnamon donuts for breakfast with a big cup of coffee.

Why You'll Love These Donuts...

To make these cinnamon donuts, we'll start by combining the dry ingredients in a small bowl. Whisk it up and set it aside for now.

Next, grab a larger bowl and add the sugar, yogurt, milk, melted butter, and vanilla extract. Use a rubber spatula to mix that all up until it's fully combined. Then add the dry mixture right in and mix.

That's really all there is to it! Spoon or pipe the donut batter into your greased donut pans, then bake on 350ºF for about 12 minutes. You'll know the donuts are done when they are slightly golden and spring back when pushed down with your finger.

While the donuts are cooling, melt some butter and, in a shallow bowl, mix together the cinnamon and sugar. Dip each cooled donut into the butter first, then into the cinnamon sugar mixture. 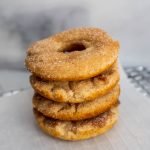